The nonlinear dynamics of Chua’s circuit and its applications to communications is studied. Chaos is realized, and is investigated by calculating the Lyapunov exponent for the system. A three dimensional phase portrait for the characteristic “double scroll” is reconstructed from the two dimensional image, from which the correlation dimension is calculated. This experiment was done by designing Chua’s circuit in the laboratory and comparing results to a simulation. 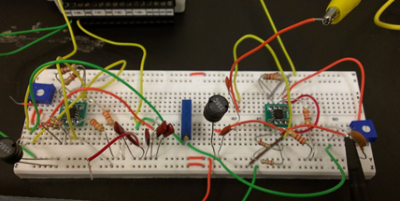 Chaos is aperiodic long-term behavior in a deterministic system that exhibits sensitive dependence on initial conditions [7]. There are many applications for chaotic systems, such as predicting nonlinear flow in the atmosphere, understanding the dynamics in cardiac arrhythmias, and handwritten character recognition. Certain studies show that a chaotic system made of circuits can produce novel musical sounds. However, in this experiment, we focus more on the applications of a chaotic system in communication. Chaotic signals are usually broad-band, noise like, and difficult to predict [8]. Therefore, chaotic systems are suitable for carrying information. In digital communication, sinusoidal carriers are used because they have optimal bandwidth efficiency and it is easier to reconstruct the original signal. However, their high power spectral density causes a high level of interference and enhances the probability of interception by other receivers [9]. Chaotic carriers can solve this problem. A chaotic transmitter can send the desired information masked by chaotic signals. This masked signal is then transmitted to the destination, and the signal might be intercepted on the way, but would not be decoded without the masking chaotic signal. At the destination, another chaotic signal generator will be synchronized with the chaotic signal generator at the transmitter and thus produce the exact replica of the masking chaotic signal. The masked signal will then be demodulated by subtracting the masking signal from it to reveal the desired information hidden within [10]. Also, broadband information carriers enhance the robustness of communication and are less vulnerable to interference from narrow-band disturbance. This is the basis of spread-spectrum communication techniques, such as the code division multiple access (CDMA) protocol used in the Global Positioning System (GPS) and in the third generation of mobile telephones.

In order to achieve masking information in chaotic signals to obtain secure communication, the chaotic oscillators, transmitter and receiver, must be synchronized. Initially, we wanted to achieve synchronization between two or more Chua's circuits acoustically [11] for the following reasons. Chua's circuit, introduced to the world by Leon Chua in 1983, is the simplest autonomous circuit that can exhibit a bifurcation and generate chaos, because it satisfies the three criteria for displaying chaotic behavior: containing one or more nonlinear components, one or more locally active resistor, and three or more energy-storage devices. It has been a very suitable subject for studying dynamical chaos by means of both laboratory experiments and computer simulations [6]. Acoustic coupling enables us to adjust various parameters to achieve synchronization, e.g. wave amplitude, feedback time delay, characteristic of media between the oscillators, etc. 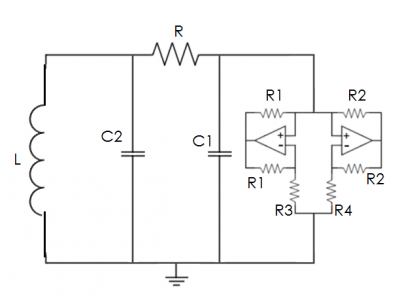 Figure 2: Circuit diagram of Chua's Circuit used for this experiment

Chua’s circuit can be built several different ways. This experiment replicated the circuit diagram in Figure (1). It has four major components: (1) a variable resistor, whose resistance acts as the control variable, (2) two capacitors, whose electrical responses act as the dependent variables, (3) an inductor, and (4) Chua’s diode, which is the source of the nonlinearity in the system. The electrical response of Chua’s diode is shown in Figure (3) and corresponds to the function g(V) in the differential equations.

Chua’s circuit was hooked up to an oscilloscope and external computer that sampled the voltages across the two capacitors at 48,000 samples per second. Data was collected for several different values of the variable resistance. 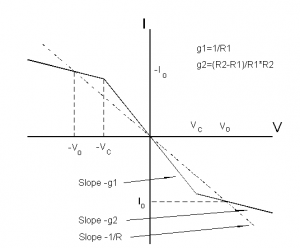 x(t) is the voltage across C1, y(t) is the voltage across C2, and z(t) is the current across L. α and β depend on the values of the various circuit components. The function g(x) is the source of the non-linearity, and it depends on the specifications of Chua's diode. The IV curve of a Chua's Diode is shown in Figure 2, and this is the piece-wise g(x) function used in the equations. For simulations of these equations, see references [1] and [4].

There are several different routes to chaos in Chua’s circuit. In the experiment, the route observed was periodic behavior, followed by a “screw attractor”, and finally chaotic behavior, referred to as a “double scroll” in Chua’s circuit [11]. This contrasts to period doubling, whose requirements of the function g(V) did not meet the specifications of our circuit [12]. The meaning of a “screw attractor” is most evident by looking at the phase space diagram for the two voltages in figure 5. Out of the periodic behavior, a single chaotic attractor was born as the resistance increased. This may be referred to as “semi-periodic” behavior, meaning that it is almost periodic, but has some chaotic aspects.

When the resistance was increased further, another attractor was born, forming a double scroll. The phase portrait for this behavior is shown in Figure 6. Trajectories in phase space are confined to this double scroll and orbit around these two attractors in a complicated way. It is this complicated behavior that we wish to analyze.

The periodic and chaotic behavior can also be observed by looking at voltage-time plots instead of phase space diagrams. The corresponding cases for the voltage across the capacitor C1 are shown below. Notice the differences between the semi-periodic and chaotic plots. Although the semi-periodic plot appears to be somewhat chaotic and irregular, it is not as definite as the chaotic plot.

The Lyapunov exponent is a measure of how two nearby trajectories diverge over time.

Two nearby points were chosen in phase space by scanning the data and finding any two points that were separated by no more than 0.0075 V across each capacitor. These two points were of course separated in time by quite a bit. Finding points any closer would prove difficult or impossible despite having data collected over about ten seconds (an incredible amount of time for the dynamics of the circuit, which can change rapidly on the order of a millisecond). Two nearby trajectories in phase space are shown in figure 10 over a short time. In such a time, these trajectories are nearly locked on and only separate by a small amount in the end. Figure 11 shows the two trajectories over a long time. By this time, the trajectories have completely different behavior and no longer resemble each other. The system is chaotic, for a small separation in initial conditions has grown to something enormous. Figure 12 emphasizes the divergence by showing how the two trajectories compare on the voltage-time plot. They begin locked on, but after a few milliseconds they take on completely different behavior. 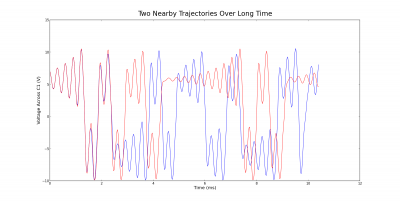 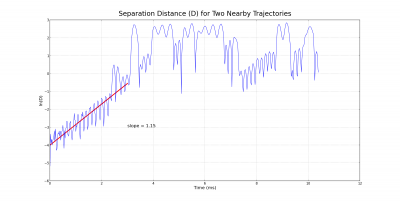 Figure 13: Calculating the Lyapunov exponent for two nearby trajectories

The Lyapunov exponent is determined by plotting the log of the distance between the two trajectories as a function of time. As a result, linear behavior is expected. One of these plots is shown in Figure 13 and a line is fitted to the first part. There is a saturation point where the linear behavior disappears because the trajectories are confined to the attractor.

Motivation from the Lorenz equations suggests that there might be some basic relationship between successive maxima in the voltage-time plot for chaotic behavior. Although Chua's equations are different from the Lorenz equations, some of the results are quite similar. Because the behavior for the chaotic case was quite different across the two capacitors C1 and C2, two distinct iterative maps were constructed. For the screw attractor, only one was necessary. These three maps are shown below.

The iterative map for the screw attractor resembles the tent-like shape observed in the Lorenz system. While the iterative maps for the two chaotic cases are quite different, there seems to be a definite relationship between the value of a given maximum and the value of the one after it.

The idea behind attractor reconstruction is that the full 3-D phase space can be reconstructed from the measurement of only one variable. The method suggests that information about each independent variable is not self-contained [7]. The method relies on a delay time and reconstructs the data according to the following equations:

If the right delay time is chosen, then the attractor may be reconstructed. An optimal time choice is one that minimizes mutual information between the signal and its time-delayed signal [13].

Here, R is the radius of a circle in the plane, and it this parameter which is varied. The correlation dimension can then be calculated by plotting C as a function of R on a log-log plot. This plot is shown below and the dimension is given by the slope of the dotted line, 1.8. 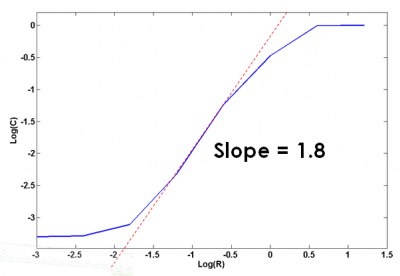 In addition to the experimental component of this project, a simulation for Chua’s circuit was also designed. The equations governing Chua’s circuit are found under the Design and Parts. 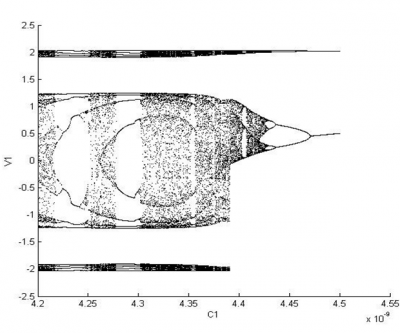 Figure 20: A bifurcation diagram for Chua's circuit. The capacitance is varied.

These were solved using an adaptive Runge-Kutta fourth order method. The advantage of the simulation over experiment is that any of the three variable can determined to a high degree of accuracy. This bypassed the need of an attractor reconstruction, but also enabled a comparison of simulated data to calculations. Although we did not do a rigorous comparison of the two, the simulation did generate results that were comparable to those obtained in the results. Similar attrators were observed in 2D and the 3D image compared to the reconstructed scroll from the data.

Another advantage of the simulation is the ability to run the experiment for any value of the resistance and tweak other values of the circuit components. This enabled the simulation to construct a bifurcation diagram for a circuit that meets the criteria for period doubling, a behavior unobservable in our experiment. The diagram is shown in figure 20 and plots the possible voltage values as a function of the capacitance.

In summary, we have identified one of the routes to chaos for Chua’s circuit, which is going from periodic behavior to screw attractor and finally to chaos. We also found the Lyapunov exponent of the Chua’s circuit to be around 1.33, averaged between the left (1.01) and right (1.65) attractor. Last but not least, the correlation dimension of the circuit was computed to be 1.8. With the help of the computer simulation, we are certain that Chua’s circuit can produce period doubling with the correct parameters. To further investigate the nonlinear dynamics of Chua’s circuit, more data needs to be collected from different configurations of the circuit. With a change of the resistances inside the nonlinear resistor, the Chua’s circuit would be capable of period doubling. With the proper equipment, the current passing through the inductor can be measured so that all three variables are measured.

Chua’s circuit has within it many complex behaviors that demonstrate the aspects of chaotic behavior. Because it is so simple to build and play around with, the circuit is widely used to generate chaotic output in the laboratory. Although it is so widely used, it is still not fully understood, for the complexities of the circuit are far too deep. The purpose of this experiment was to demonstrate and apply various methods in nonlinear dynamics to the circuit in hopes of shedding some light on the complexities observed.

There are a host of other things that can be done with Chua’s circuit. One thing we would like to do is to construct greater comparisons between simulation and experiment. For instance, it is known that the Lyapunov exponent varies depending on the trajectory chosen, i.e. it has a spatial dependence. The simulation could answer such questions as “How large is this variance for different points all across the attractor?” This could then be compared to the variance obtained in calculating the Lyapunov exponent, and possibly explain why such a variance was observed. An even bigger goal for the future is getting back to our initial objective and synchronizing multiple Chua’s circuits acoustically, and thus help the security of communication.