Difference between revisions of "Group 6"

Ferrofluids exibit nonlinear dynamical behavior in response to both static and oscillating external magnetic fields. An experiment will be conducted to induce such a response using a Helmholtz-coil. The apparatus will be configured such that a single peak will be isolated, and observed with a high-speed camera. First a static magnetic field will be applied. This is expected to result in nonlinear surface behavior accompanied by a hysteresis effect. Spontaneous peak formation will be observed (Rosenweig instability) at a critical field magnitude. We will examine this response and relate an established qualitative model. The objective of this proposal is to stimulate a small drop of ferrofluid with a DC magnetic field so as to create a single fluid peak, and observe the effects on the height of the peak and the resulting bifurcation in height as a function of magnetic field strength. Furthermore, we will incrementally increase the temperature of the fluid above room temperature and observe the effect on the bifurcation parameters. The model for this system has been shown to agree with experiment, however, we will aim to add a thermal parameter that will theoretically account for the change in height as the temperature is varied and any changes in the resulting bifurcation diagram.

We hypothesize that the peak height, h, of the fluid can be controlled by adjusting the static magnetic field strength, H0, and that the dependence of height on this field strength will, upon exceeding some critical field strength Hc, exhibit a subcritical pitchfork bifurcation. The solution h = 0 will no longer be stable, and the fluid peak height will jump to a value greater than zero upon increasing the strength. Ferrofluids demonstrate hysteresis[1, 2], and this will appear in the bifurcation diagram as an extended region of stability upon decreasing the magnetic induction. Secondly, increasing the fluid temperature will exponentially decrease the fluid viscosity[3] in accordance with the Arrhenius relation (1), but will also decrease its magnetization (the ability of the fluid to align with the applied field) according to Langevine’s formula (2)[4, 5]. After a Taylor series expansion for small values of H, the magnetization M can be approximated by (3).

For (1), µ0 is a constant, E is the activation energy, R is the universal gas constant, and T is temperature. For (2), m is the magnetic moment of one particle, n is the number of particles, H is the magnetic field, k is Boltzmann’s constant, and T is temperature. Due to the exponential decline of viscosity with temperature, we expect the viscosity to drop off quicker than the magnetization, which goes with the inverse of temperature. Therefore, we hypothesize that as temperature is increased, the lower viscosity will dominate the lower magnetization, leading to a lower critical field strength and subsequent leftward shift – to lower H0 values – of the bifurcation point.

The formation of ferrofluid liquid crests due to magnetic induction was first explored in seminal work by Cowley and Rosensweig in 1967[6]. They provided a theoretical basis for the critical level of magnetization for the onset of the instability at which peaks form and coined this phenomenon the “Rosensweig instability”. They validated the theory with experimentation by providing a uniform magnetic field, via a Helmholtz coil pair, to a small amount of fluid located between the coils. Oddly, the induced peaks were hexagonal in shape, and measurement of the distances between the peaks showed a close comparison to theoretical predictions. Furthermore, their work showed that the instabilities were governed by the stabilizing gravitational force and interfacial tension, which agreed with established knowledge of these systems[7]. Since then, ferrofluids have been shown to have interesting nonlinear behavior in the presence of magnetic fields as drops on a surface[1], fluid pumped under magnetic stress[8, 9], single[2] and multiple[10] peak formation in standing and oscillating magnetic fields, and propagation of these waves under temporally and spatially modulated magnetization[11]. Ferrofluids are ideal for a range of applications, including electronic devices to prevent debris accumulation in hard drives, mechanical applications for reducing friction between parts, aerospace, instrumentataion, and medicine, to name a few. Ferrofluids also provide many ideal characteristics for studying their surface instabilities. One includes the fluid’s colloidal and thermal stability. The magnetic particles remain in suspension, without agglutinating and precipitating out of solution. This is facilitated by thermal energy (Brownian motion) but is largely due to a surfactant coating on each particle that prevents the particles from permanently binding to each other[12]. The thermal stability has also been documented. Over several weeks of maintaining the fluid at temperatures above 150°C in seals jars, ferrofluids show minimal change in viscosity and magnetic permeability at 27°C before and after heating[6]. Furthermore, ferrofluids are typically capable of responding to a magnetic field in temperatures ranging from -55°C (outer space) and 200°C.

The overall apparatus will consist of the following parts list and configured according to Figure 1(A). The Teflon fluid holder is used to obtain a flat fluid surface, taking advantage of the low surface tension of the material. The Teflon holder will be fabricated by drilling a 3mm diameter and 12mm deep hole into the bulk Teflon and then creating a 30 degree countersink. The ferrofluid is then injected into the hole. The current controlled power supply will drive the magnetic field generated within the Helmholtz-coils and the event monitored using a high-speed camera. Computer software will be used to correlate the height of the peak by a pixel/length relationship. The parts list follows: Helmholtz-coil – Welch (supplied), Teflon Fluid Holder (on order), 30A current controlled Power Supply (supplied), High-speed Camera (supplied), Ferrofluid – Ferrotech EFH-1 (supplied), magnetic field meter (supplied).

They dynamic response of the ferrofluid depends directly on the control parameter, the magnetic field. An understanding of the field magnitude and profile are essential in obtaining consistent and predictable results. The vector potential and field of a circular loop is given in Smythe [13] and elliptic integrals given by ref [14]. The model was expanded to account for two coils by adding an additional term and subtracting out the separation distance (d). The model was verified with parameters given in ref [15], by inputting the given coil dimensions and input current. The magnetic field strength of the model (8.179*10^3*A/m) closely matches the stated value of (8 *10^3*A/m). Figure 1 (B) shows a cross sectional view of the coils and vector field and the chosen reference origin “O” used to define the system. See Appendix for calculations. The exact parameters and number of turns of the Helmhotz-coil (Welch) have not yet been measured; however, a similar model, currently in production, from the same manufacturer was identified (Sargent-Welch, CENCO E/M Apparatus) and its values used to approximate the field conditions. Assuming 5 Amp input, a modest magnetic induction of 5.9 mT is expected at 90deg. The angle and magnitude did not deviate significantly within a 20cm diameter (< 3.3% from center to 10cm radius) (Figure 1, C). On the z-axis, the magnitude is consistent at < 1.5% change within 14cm of the midpoint of the coils (Figure 1, D). Note that the profile is reputed constant in φ, which is the angular direction about z and normal to z. 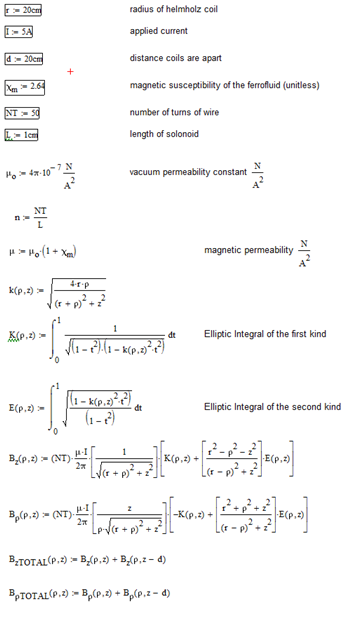