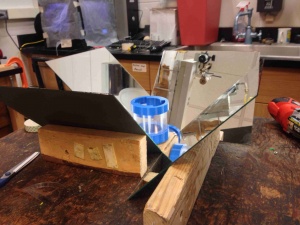 Sedimentation of Chiral Particles in a Shear Flow

This is the website for the Chiral group. As a project for our Nonlinear Dynamics and Chaos class at Georgia Tech, we are investigating a method for the mechanical separation of chiral particles. The project is finished as far as this course concerns, but it will most likely result in more research and a more comprehensive paper. At the moment you can view our presentation material, whitepaper, actual paper, data, pictures and videos of our setup at this website.

Sorting particles based on their characteristics is a common goal in industrial and commercial applications. In chemistry, small differences in molecules can change their impact on the macroscopic scale. One such physical difference is chirality. The behavior of chiral particles is interesting due to their prevalence in biology. Chirality can also be important in the development of drugs, as enantiomers often have differing chemical properties. Shear flow may provide a mechanical separation method whereas most current methods are chemical. Such a method would be of interest to pharmaceutical companies because a mechanical method can prove to be cheaper and easier to perform. Our experiment will grant us a greater understanding of the physics that would be involved in such separation. 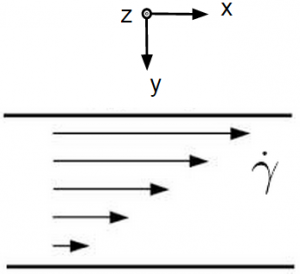 Figure 1: Force gradient viewed from above.

<math>\mathbf{V}(t)</math> is the velocity of the particle, <math>\tilde{\mathbf{g}}</math> is a tensor encompassing the geometry and size of the particle, and <math>\mathbf{N}</math> is the direction of shear as it applies to particle geometry. Summarily, the particle's velocity is a sum of flow advection (<math>\mathbf{v}</math>) and motion due to the particle's geometry in concert with applied shear. One may also include a term for brownian motion <math>\mathbf{V_b}</math>, but the size of our particles was sufficiently large to make this term negligible. Due to the force gradient in <math>\hat{y}</math>, an inserted object experiences a torque about its <math>\hat{z}</math> axis. This rotation created by this torque may, depending on the geometry of the object, lead to motion in the <math>\hat{z}</math> direction. We can write this motion as:

Where <math>\chi = \{ 0,-1,1 \}</math> indicates the direction of the particle's chirality, <math>g</math> is a constant based on particle geometry, and a is the particle size. We see that this is simply a reduction of the second equation to one dimension.

To reach our goals for this experiment, we needed a highly viscous fluid in shear flow and, contained in the fluid, particles with of opposing chirality. 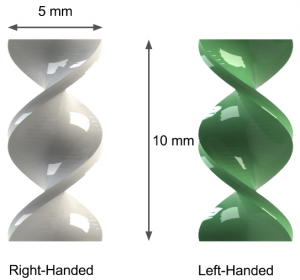 Figure 2: Model of the left hand chiral particle used in this experiment.

A Taylor-Couette device was the centerpiece of our experiment. The device consisted of a bottom part, a top part, a transparent PVC tube and a rotating dowel. All parts except for the tube were printed on an ordinary 3-D printer (Makerbot Replicator). The distance between the outer tube and the inner dowel gives just enough clearance to let the particles align themselves freely. A larger distance (used in our first iteration) doesn't generate enough shear for the separation effect to be visible. The effect we are demonstrating has only been experimentally examined using rotating parallel plates before, this should be the first time the effect is demonstrated in Taylor-Couette flow. 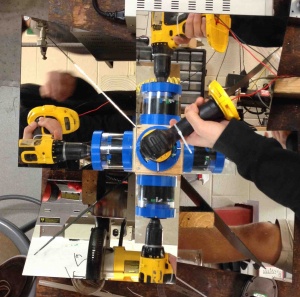 The chiral particles are small helices described in Figure 2. Ten left handed particles, ten right handed particles and ten neutral particles (consisting of flat rectangles) were printed and used. The Taylor-Couette device was filled with transparent corn syrup, with a viscosity of 1450 - 2170 cSt was chosen. The rotation of the inner dowel was provided by an ordinary cordless drill, connected to a power supply unit. The velocity of the rotation was controlled by regulating the voltage of the drill. The data acquisition was all done by a single camera. In the first experiment the dowel was placed in between four tilted mirrors, and the camera was placed above the apparatus. This gave a full 360 degree view of the Taylor-Couette device. In the second and third experiments the camera was mounted facing the side of the Taylor-Couette device, and no mirrors were used. 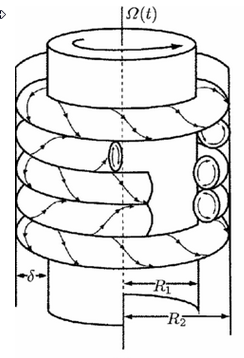 Figure 4: An illustration of Taylor vortices in a Taylor-Couette cylinder, courtesy of APS.org

In the first experiment we put 30 particles in the device, evenly divided amongst left handed, right handed and neutral ones. The dowel was spun at 1.4 revolutions per second clockwise and then counter clockwise for about a minute. The position of all particles were recorded and tracked manually in MATLAB. Their mean <math>z</math> position was calculated and plotted. In the second experiment the Taylor-Couette device was loaded with one left handed particle and one right handed particle placed on opposite sides of the center dowel. They were aligned differently and spun at different speeds. The alignment angle of the particles were tracked manually in Matlab and plotted as a function of time. In the third experiment the device was filled with different mixtures of corn syrup and kallieroscope fluid. The goal was to see weather we were experiencing vortices that could interfere with the alignment of the particles.

In Figure 8 you can see data for the average $z$ position over time for each handedness. This clearly verifies the existence of the separation effect. During the data acquisition some particles reached the bottom of the device, creating a "knee" in the plot. Figure 9 shows the average velocity over time. We also took a linear fit to the data preceding the "knee", pictured in Figure 7. The fit has an <math>r^2</math> value of 0.79, indicating that the trend is indeed linear as expected. However, there is significant noise in the data.

The alignment plots (Figures 5, 6) need some explanation. Because no mirrors were used the particles come in and out of visual range, leading to gaps in the data. The reason we didn't collect data from all directions was that the Makino paper predicts that the particles should align, and that long-term effect should be seen even if only one side of the cylinder is observed. Also worth pointing out is a collision at t=5 in Figure 5. The collected data doesn't support the alignment effect predicted in Makino's paper. Even for longer durations of time no visible alignment was discovered. Banding wasn't observed at lower voltages, which indicates that Taylor vortices did not affect particle orientation.